What is the European Cycling Challenge?

The European Cycling Challenge (or ECC) is an annual event which takes place each year between 1st and 31st May. Teams of Cyclists from cities all over Europe compete against each other to discover which city will be the one to collectively cycle the furthest distance over the course of the month. Originating from an idea conceived in the city of Bologna involving just 70 people, the competition is now in its 5th year, and over the course of the month of May, 52 cities across 17 different European countries took part, with 46,000 people in total cycling around 4,000,000 kilometres. The challenge has been designed to encourage people to give up their cars and to hop on their bikes for a more eco-friendly and health-promoting form of transport, and as an added benefit, participating in the ECC allows cyclists to take an active role in the cycling network planning process in their own area. Participants are permitted to use any type of bike, including electric bicycles and can track any trip for either commuting or leisure purposes as long as it is by bike.

What Is The ECC Mobile App?

The ECC represents a unique way of promoting health and fitness in conjunction with sustainable transport thanks to its gamification approach. Encouraging locals to use their bikes rather than other modes of transport, the Challenge turns essential trips into a fun activity thanks to the downloadable mobile app which allows them to track the distance that they have cycled each day, and which contributes to the total accrued by their city. The tracking app utilises the smartphone GPS system and is free to download, allowing participants to check the position of their city’s team on the online leaderboard in real time. There is also an extra element to this app, as the data collected can also serve as a guide for the cities involved to find out where the greatest amount of bicycle traffic in their area occurs. City planners can access bike trip heatmaps which offer a deep analysis on the origins and destinations of journeys, evidence of cycle lane congestion and time wastage at intersections, and a clearer idea of when and where cyclists travel within the city. They can then use this detailed feedback to plan new road developments around the real needs of cyclists. 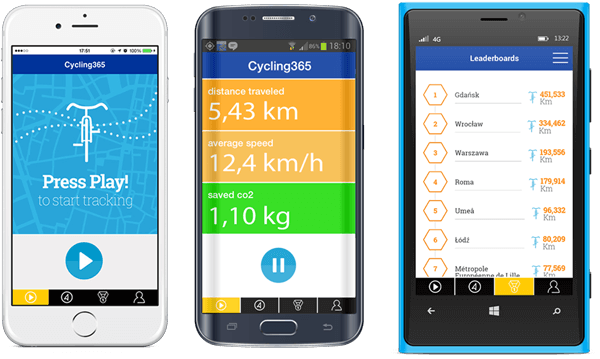 Anyone interested in participating in the ECC will find all of the information that they need on the European Cycling Challenge Website. The easy to access platform allows users to register their home city to join the challenge or to join an existing team in order to contribute to its total. They can also join a sub-team – for example with others at their school or workplace. All of the rules are clearly listed and the app can be quickly and easily downloaded from the interface. Visitors to the website can also check out the up-to-the-minute leaderboard which shows the teams that are leading the way and how many collective miles have been racked up. Visitors can also see the current cycling heatmaps for each of the competing cities and keep an eye on the most-cycled routes in their local area.

Which Teams are Competing?

The number of teams participating in the European Cycling Challenge varies from year to year depending on the amount of interest generated, however the numbers of cities joining in has increased over the years from 39 in 2015 to 52 in 2016. Teams from all over Europe have registered to take part, and 17 different countries are currently represented, with several countries boasting more than one team. The 2016 line up was as follows: